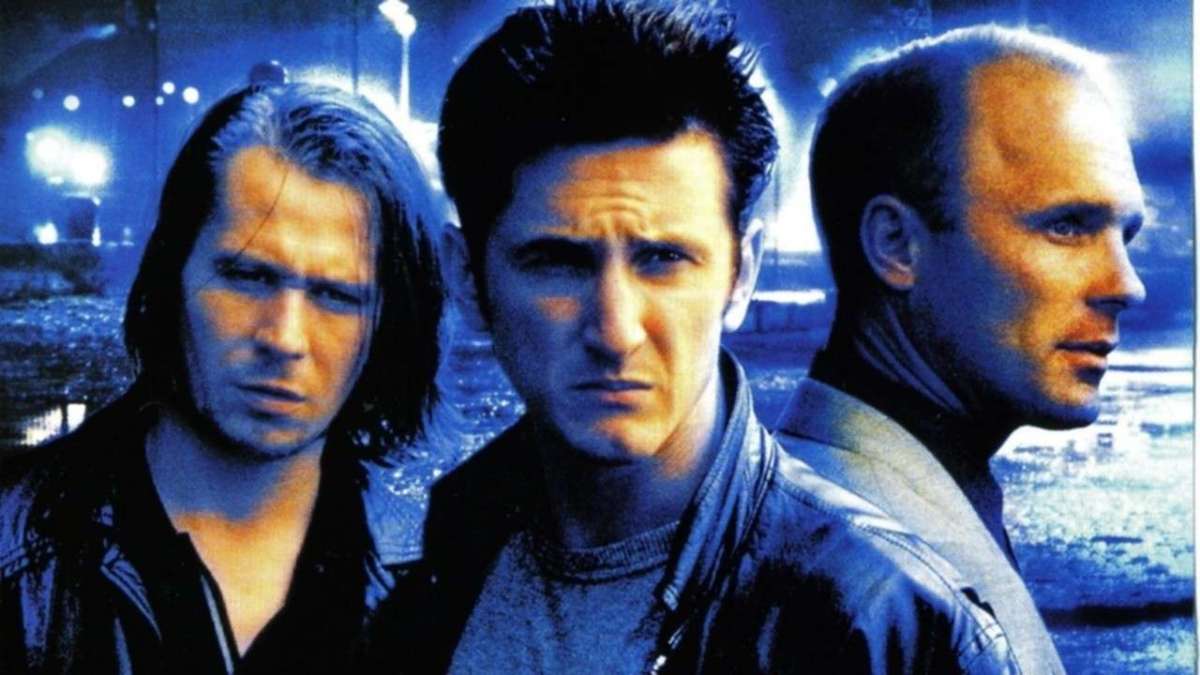 A piece written in 2017 in the style of the BBC television show Moviedrome. A version of this was shot by the commissioner, but sadly was unreleaseable due to sound issues. Here, however, is the script,

State of Grace is a 1990 American gangster movie. Not a rare thing to be. Between September 14th and September 22nd four such movies were released: State of Grace, King of New York, Miller’s Crossing and Goodfellas. Paramount’s Christmas gift to the world was The Godfather Part III. We won’t get into that.

Dennis McIntyre’s screenplay is inspired by the Westies, a notorious gang of unpredictable Hell’s Kitchen Irishmen. The Flannery Brothers, played by Ed Harris and Gary Oldman, are based on Jimmy Coonan and Mickey Featherstone. Featherstone turned informer in the 1980s to assist Giuliani’s far-reaching RICO prosecutions. Coonan remains in prison until 2030 when he will be 84 years old.

It is a very violent film receiving 7 unanimous X ratings from the MPAA. A prologue involving the dismemberment of Michael Gambon was cut overnight between previews. American critics considered even the R-rated brutality box office poison but noted the originality of subject, excellent performances and stylish direction.

McIntyre passed away in February 1990. Another playwright, David Rabe who scripted Casualties of War, was drafted in by Sean Penn for rewrites. Rabe, plus the tendency of director Phil Joanou to let his cast improvise, expanded the romantic subplot capitalising on Penn’s blossoming off-screen relationship with Robin Wright. Other associates of Sean and Leo Penn to look out for are John C. Reilly, Joe Viterelli and R D Call – whose face almost steals the picture.

Joanou was a 27-year old protege of Spielberg who graduated from episodes of Amazing Stories via Three O’Clock High to concert movie U2: Rattle & Hum. This “Irish connection” prompted an approach from Orion Pictures. U2 were originally to score State of Grace and McIntyre’s draft contains many references to Jackie in a band t-shirt or smashing up a jukebox because it “doesn’t have any U2 on it”. Would their score have helped the film’s marketing? Probably not. Rattle & Hum: The Movie was a massive flop but State of Grace’s superb theatrical trailer uses two Joshua Tree songs to notable effect.

What elevates it above the status of also-ran are some of the very things that drew initial criticism. UK critics considered Gary Oldman’s first American feature another defection of home grown talent to the Hollywood money machine but Den of Geek asked recently whether it might just be his finest performance.

Jordan Cronenweth, who was living with Parkinsons Disease, shot his last three films under Joanou’s direction. State of Grace contains some of his best work. It is also a great New York film, shot entirely on location in places many of which no longer exist. The influence of The Wild Bunch on the stand out action climax reflects themes of extinction and gentrification which remain relevant today. State of Grace’s audience grew through repeated screenings on HBO, home of The Sopranos, whose fans would recognise many of the same locations.

Had the narrative and characters taken a more generic form, it may have played like a decent Walter Hill flick. Joanou, however, is allowed to let dialogue drive the film, which is often quite theatrical. The energy of the young cast is wonderful to revisit. When editor Claire Simpson, who won an Oscar for Platoon, cuts away from an onscreen fight it’s usually because the fight had had to be broken up. “Blood was spilled” says Joanou, “and fingers were broken.”

One question remains. That fountain of knowledge, the Imdb, lists a co-director: one Michael Lee Baron. Nowhere in the credits does Mr Baron’s name appear and he gets no mention in any available commentary. Is this a mistake? It can happen.

What we do we know about Michael Lee Baron? Not much, except that he was a stunt co-ordinator on Air Force One and a producer on I, Robot. Was he second unit for the film’s gonzo sequence where Oldman and Penn do the hundred-yard dash through a blazing building? Michael Lee, if you’re out there, get in touch. We’d love to hear your story. On or off the record . . .

Here’s the trailer for State of Grace

2 thoughts on “State of Grace – A Previously Unpublished Introduction”

The Sorceress on Letterboxd!